Krazy Kards — About the NAWC

The NAWC was formerly a big time wrestling federation within the Milky Way Galaxy. The NAWC was headquartered on Earth originally then came into financial trouble and was bought out by a group of investors from the planet Alaara. The NAWC is run by a council of five and they have elected former wrestler Sam Moon as commissioner and announcer. Moon retained about 1/3 of the NAWC's roster in the transfer and also hired major indy wrestlers to fill in the rest of the roster. Original NAWC wrestlers such as Keth Vale, Azrael, Bloodstorm, Madness & Mayhem, and Danny Sage remain and have mixed with home grown Alaaran talent Ciber Naught, Chouuju, Assassin X, Tera Naught, The Butcher and Raechel Killian as well as outside rookie wrestlers like Belroc, Sekada and Manta. This mix has yielded an explosive reaction and things are looking great for the NAWC. Another important factor of the NAWC, which has been kept quiet until now, is that the Alaaran Government uses it as a training post for it's annual Contest of the Champions Tournament that decides the fate of the governing body of the Alaaran government for the next two-year term. Originally kept quiet as the Alaaran Government didn't want their nations champions singled out before the Contest, they now use the NAWC and it's training facility - The Sanctuary- to send their would-be-champions to train with some of the best figthers and athletes in the galaxy and gain an edge over their rivals.

The NAWC the flagship wrestling federation is run by a five man Council that is represented by Sam Moon and Bob MacAdue. The NAWC has gone under recent changes that removed 3/4 of it's roster, incuding some champions. Some have since returned, others have left for other feds and some plot revenge on the fed that has abandoned them. The NAWC has also lost it's main drawing wrester in Azrael who lost a Loser Leaves Town Match. Who will step up and take his mantle as the center piece for the NAWC? 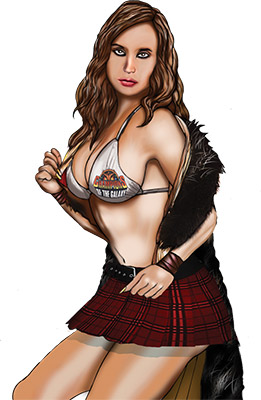 DFW — Dragon Fire Wrestling is an Earth based wrestling federation that holds wrestling cards mostly in Japan. This federation is run by Japanese sports mogul Masahiro Sato. It serves as a regional wrestling development Circuit for the NAWC.

VKW — Viking King Wrestling federation is based in the Scarred Lands on the planet Mythica. The roster is populated with Vampires, Werewolves, Mages, Witches, Demons and other Mythic creatures. The fed is also the next step for the former SCCW (Southern Cross Championship Wrestling) MWF is keeping the title holders who signed on with the fed. This leaves two titles now vacant for the new fed to fight over.

NGWF — Neo Galaxion Wrestling Federation. The NGWF is modeled after the sports leagues of the 20th and 21st Century. The NGWF Season is 13 matches long with playoffs and championship following the season. Currently the league year is 2085 and has a twenty man singles (A) League and an eight man tag team (A) League. Each year a rookie wrestler will be brought in, and the league structure will fluctuate depending on how many new rookies enter or leave the federation.