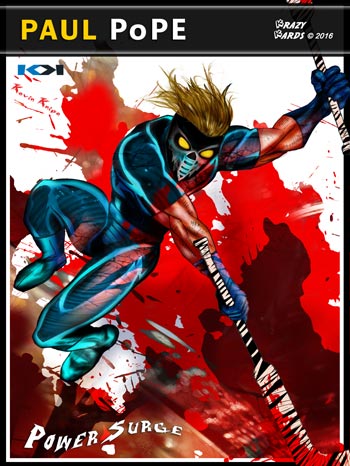 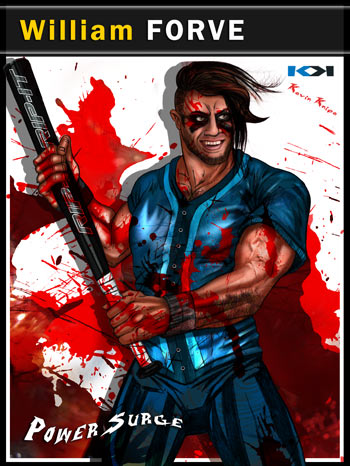 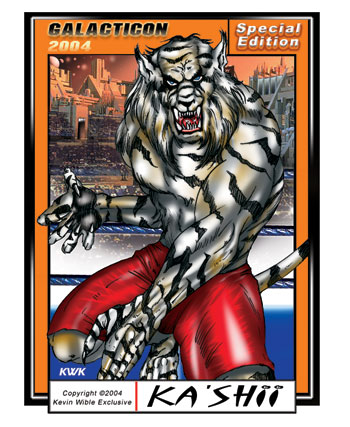 Ka’shii is among the many stars that have emerged from Pride Lands, none are more loyal to Rak’Ashan and his mission that Ka’shii. Like Rak, he too seeks to keep the outside world from raiding and destroying their home world. However, where Rak is Savage, Ka’shii is cunning. Despite his appearance, Ka’shii is Rak’s right hand within the ranks of Rak’s followers. Occasionally, he will tag with Rak or others of the Were-coalition, but he is also a very tough singles star. Some say Rak may be grooming Ka’shii to take over for him in their mission in the event anything happens to Rak. Neither will speculate on the truth of the matter, but it is known that Rak has SOME influence over Ka’shii’s wrestling style as evidenced by his First finisher, The Feline Fatality , which like Rak’s can hinder an opponent’s effectiveness in the match. For now however, Ka’shii is in a supporting role for Rak and for his opponents, and the opponents of the Were-coalition, things have never been more deadly! 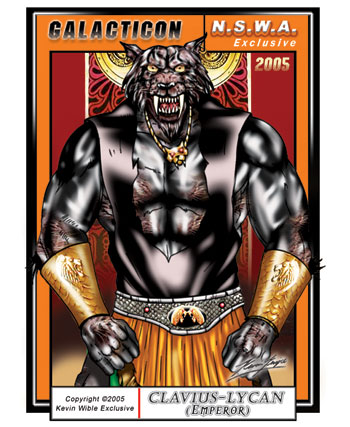 Clavius-Lycan, emboldened by the battles fought and won by members of the Lycan Alliance presence in the NSWA has decided that he too shall compete and bring further glory to the Werecat Nation. Like Rak & Co. He is also from Pride Lands, which the nation claims is located somewhere in the heart of Dimension X. It was Clavius who supposedly encouraged Rak’ashan (privately) to pursue his mission to stop anyone else from finding and raiding Pride Lands. When Clavius was asked about Rak’ashan’s and the rest of the alliance’s true background, Clavius snarled and stated that it didn’t matter what anyone believed, because although the past is a teacher, the past is not necessarily basis for a motive. When pressed further, Clavius smashed a nearby holovid camera with his fist and walked away.

Rumors have surfaced that Clavius ascended the mantle of emperor of the Lycan emperor when Rak’ashan’s father Mav’Rahshan, the previous emperor, was killed by raiders. Whispers outside of the pride lands is that Clavius and Rak hunted down those that killed Mav'Rahashan, and Clavius's brutality with dealing raiders is why Rak follows the new emperor. Neither discusses what transpired, but the bond many say between Clavius and Rak would be similar to a Master and Apprentice would be the closest terms useable and then that would barely scratch the surface.

The term LYCAN, In Clavius’ case is an indication of rulership. Clavius rules the Lycan's with iron control; he has the ability to tap into any Lycan making him a powerful leader and a dangerous opponent in the ring and the political field. Clavius not only is capable of mixing it up in the ring but also can provide guidance from ringside, making him a valuable ally in the Allainces battles! 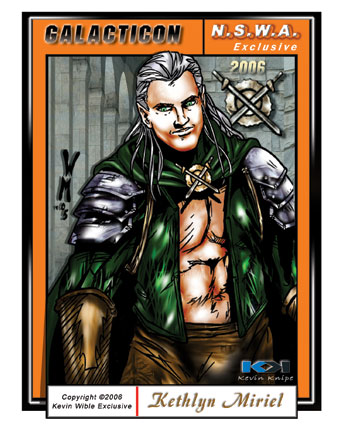 Kethlyn is one of the newest members of the Atlantean Force in the NSWA, much to Za’ara Koravel’s regret. Kethlyn being IN the NSWA is a headache to Za’ara of monumental proportions. The story around the locker room is that Kethlyn was a member of the diplomatic corps –an almost abandoned part of the Atlantean Military, but, surprisingly enough, Kethlyn was very GOOD at his job The problem came when Kethlyn tried to negotiate with a tribe of Lycans that either escaped Dimension X or were never part of that group to begin with. Kethlyn was sent to negotiate a treaty with the Lycan ruler, a were-bear named Uur-sas. Uur-sas was impressed with the strength of the Atlantean army and agreed to provide some of his were-bear army as shock troops for the elves for one-quarter of the populations conquered to be used as either foodstuffs or potential recruits.

The emperor ALSO had an Empress named Uur-shanna, who took a liking to Kethlyn for some strange reason-which was where it all went downhill. The night before the treaty was to be finalized, Kethlyn was caught trying to earn the favor and catch the eye of the Empress. This drew the ire of Uur-sas. It was only through sheer luck that Kethlyn was not either killed or turned into a Lycan himself. This was the last in a series of screw-ups on his part. Normally, such an action would require he be placed in front of the Queen for execution. However, since the Queen was busy with her own Battles in the NSWA, a council member left to oversee Atlantis, decided to kill two birds with one stone. The Elvin stable needed a second male to take the matches Blackoak would not take and Kethlyn needed to be disciplined so it was decided he would be sent to the battlefield that was the NSWA.

Kethlyn is in no way shape or form your typical Atlantean warrior, though he does share some of the similar viewpoints. His main focus seems to be a taste for the finer things in life aka rich and exotic food, drink and women. Kethlyn, surprisingly enough, is also a decent wrestler, having taken the lessons almost literally DRILLED into him by heart. This also leads to many a stressful moment for Za’ara, especially when the bills come in. The ONLY thing that seems to keep Kethlyn in line is threats by either Za’ara Koravel or Daeron Blakcoak to send him to either some front line in the Atlanteans’ “war” with the galaxy or by vowing to send him to where convicts were sent to go when the planet was just starting-the coal mines at the heart of the Planet. Of course, the mines dried up centuries ago, but you won’t convince Kethlyn of that. It is also rumored that he is either a first or second cousin to the Queen herself. Za’ara refuses to elaborate, and all attempts to get the information from Kethlyn, usually ends up with him scurrying off in fear after a scowl from Za’ara. 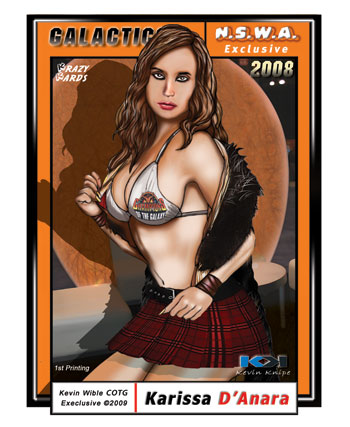 Karissa D'Anara hails from the same planet as Shawn Atlas, and, like him, she also was also victimized by the wars that scared there home world. Unlike Atlas, who only had the streets and eventually his teacher, Karissa fell in with a group of girls in a fighting school with an aging teacher. Karissa was also taught more than just fighting-she was taught art, science, literature, Math, all the while training to keep her body in top form.

While she was training, she came across a younger Shawn Atlas in the midst of his training as well. The two struck up a friendship and parted ways. Years later, the pair met up again and not only picked up where they left off, but it began to lead to a much more serious future. Marriage between the two was a very distinct possibility. Shawn had told her he would fight one last time, collect his winnings and retire with her. Then, Disaster struck their relationship-as the last opponent turned out to be the infamous match with Jake Storm. Shawn became obsessed with beating the hell out of Jake Storm and Karissa…there was just no room for her in his life anymore. Having nothing else to do, Karissa returned to the school and dove headlong into training for the many matches that her school was chosen to compete in-thus wining a myriad of trophies, as well as much honor and glory for her school. But all this left a bad taste in her mouth. She had become known as the best female fighter on the planet, but in her mind, this was an empty Title. After all, what good was being the best when no one was there to share it with you?! Just as she was about to retire, fate had another plan for her as out of the Blue, she heard from someone she had not heard from in years-Shawn Atlas. A somewhat matured and wiser Atlas called her and told her he was forming a group of his own in the NSWA and she was the first person he though of to fill a spot on his team. Karissa agreed and after some training, to better incorporate her style into the competition that one might expect in the NSWA, she had her debut match…and won! Karissa was thrilled to not only be somewhere where the competition was fierce, but she was back in the company of the man she once greatly cared for! Even Shawn Atlas smiles a bit more in her company, which is a miracle to say the least. How will Karissa’s drive and determination in Atlas’ stable turn out? Time will tell! 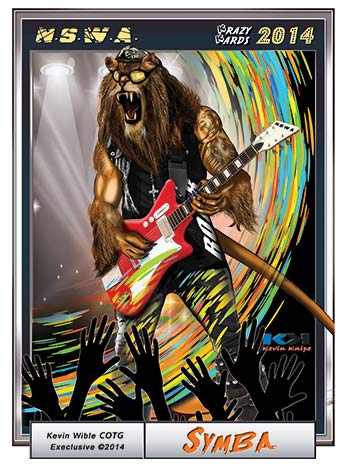 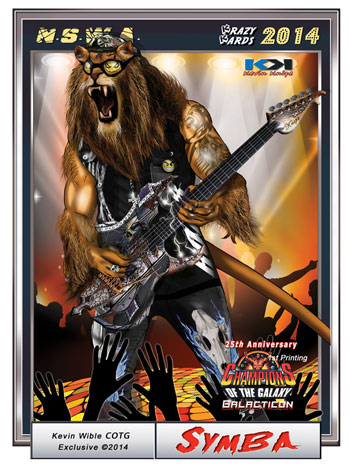 Not all of the cats that come from pridelands are being on proving their physical prowess and racial Superiority. Some cats, though a very small percentage, seek to conquer the galaxy through other means, and in Symba’s case, it’s Music. Symba has a rare gift to croon to the audience and rocking out the next minute. His hit single, “Lycan Blues” talks about the plight of the werecats, being hunted simply for the skin on their back, while his motto “Rock and Roar” has become the rallying cry for a new generation of musical fans across the Galaxy!